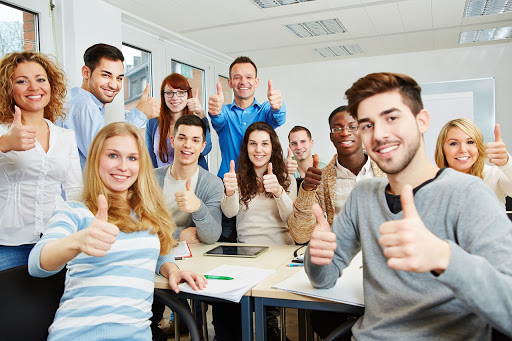 The volume of tables entitled “Internationale Bildungsindikatoren im Ländervergleich” published today presents education indicators at the level of the German states and compares them in an international context. This joint publication of the Federal and State Statistical Offices supplements the OECD publication “Education at a Glance 2020”, which was presented yesterday.

Around 10% of tertiary students come from abroad

In 2018, around 378,400 students at tertiary level1 educational institutions in Baden-Württemberg were aiming to obtain a qualified degree. According to the State Statistical Office, almost 38,100 of these were international students2. At 10.1%, their share was almost identical to the national average of 10.0%.

By far the most international students at universities came to Baden-Württemberg from China. Their share of international students was 13.7% in 2018. Students from France were the second largest group with a share of 5.1%, followed by students from the USA (3.3%) and Italy (3.2%). The high proportion of French students is probably due to the geographical proximity of France and Baden-Württemberg. Students from China were also the most frequent students at all German universities, with a share of 10.4 %. Next in line were students from Austria (4.4 %), France (3.0 %) and Italy (2.8 %).

Above average share of private schools in secondary education

In 2018, almost every 9th pupil in secondary level I3 in Baden-Württemberg was taught at a school run by an independent organization. With a share of 10.8 %, Baden-Württemberg was above the national average of 10.2 % and in third place behind Bavaria (13.7 %) and Saxony (11.6 %). At 9.8 %, the share of students in Baden-Württemberg’s private schools in the upper secondary level of education4 was somewhat lower, but it exceeded the national average of 8.3 % even more clearly. Here, Baden-Württemberg had the fourth highest proportion of private pupils among the federal states, which was only exceeded by Saxony (11.0 %), Brandenburg (10.5 %) and North Rhine-Westphalia (9.9 %).

In contrast, only 5.7 % of pupils at primary level5 schools in Baden-Württemberg attended a private school in 2018. This figure was still higher than the German average of 5.0 %. However, it was significantly lower than in Hamburg (12.4 %), Mecklenburg-Western Pomerania (10.7 %) or Berlin (10.1 %), for example.

1. Tertiary education is divided into, on the one hand, largely theoretically oriented programmes which provide qualifications for access to advanced research programmes and professions with a high level of qualification and, on the other hand, programmes which focus on the teaching of practical/technical/occupational skills for direct entry into the labour market In addition to higher education institutions, the tertiary sector also includes courses at technical colleges and schools in the health sector lasting at least two years.