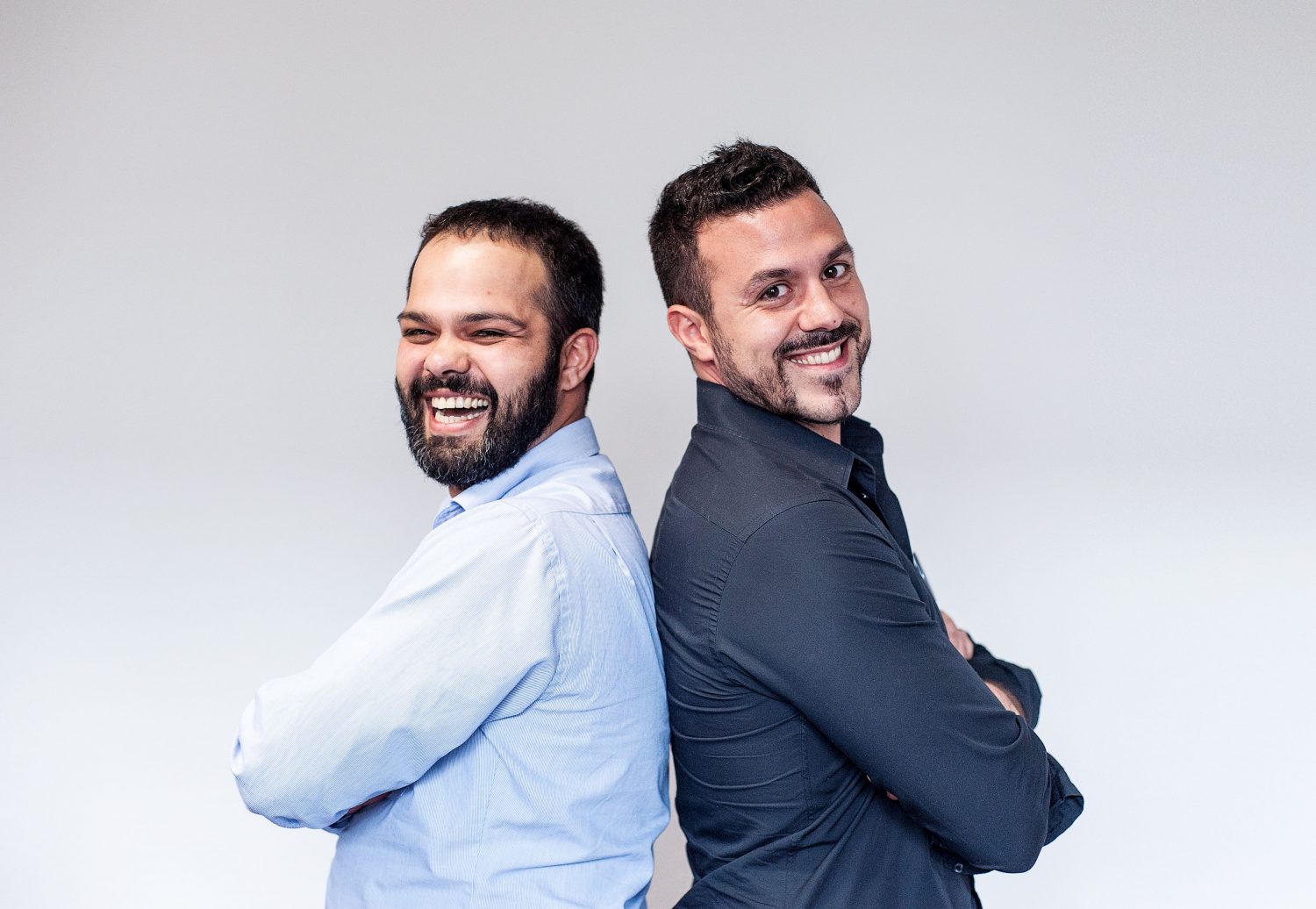 “Entrepreneurship is the foundation for a sustainable future”, says Eleftherios Hatziioannou. The Co-founder of the startup SMOOPE discusses with the authors of “New in BW” magazine the pros and cons of entrepreneurship in Stuttgart and why the support of young innovators matters to him.

Can you tell us in your own words what SMOOPE is doing exactly? 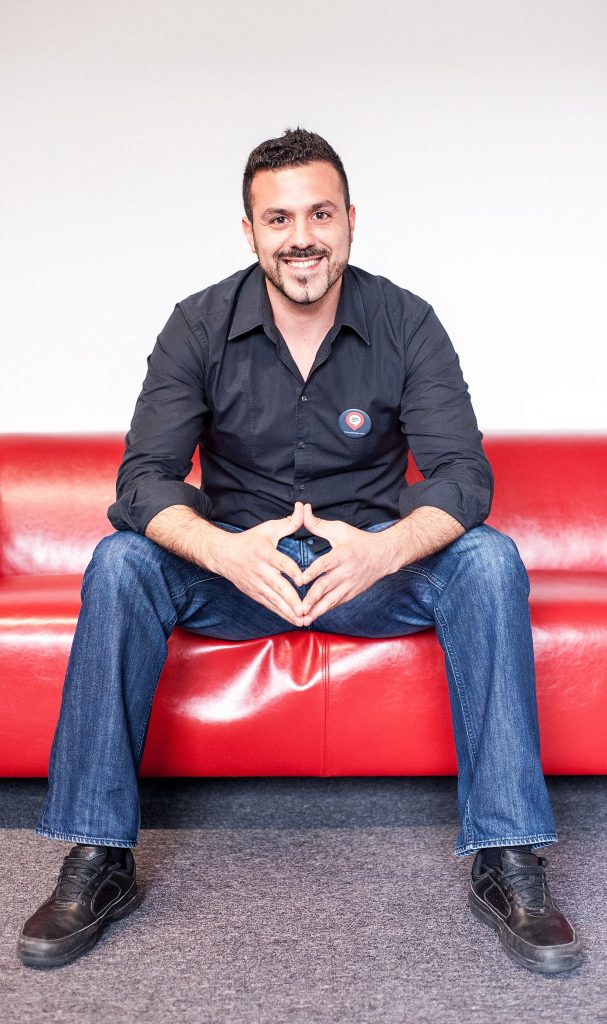 SMOOPE specializes in smart and safe messaging-solutions. We are using the communication style of Whatsapp, WeChat and alikes, but apply it to the context of businesses. Their requirements differ a lot from those of common people who use such tools to stay in touch with family and friends.

What led to the founding of SMOOPE?

People neither like contact forms anymore nor they want to call somewhere to get information. We asked ourselves: What if people had a messenger to approach businesses?

First we worked with telecommunication shops. Later we were also approached by banks, insurance companies or doctors, who all said:

“Hey, we heard you are offering a messenger solution for telcos, could we use that for our customers as well?”

The feedback of both businesses and their customers was great. And that’s how our first idea evolved; we developed SMOOPE from an app to a solution which can be used in different industries. At some point we realized that it´s not about developing another app, it’s about offering this kind of communication in the media businesses already offer to their customers and prospects. For example websites, customer portals or mobile apps (e. g. mobile banking). Why not integrating a messenger service right there ? To cover all digital touch points, we developed the infrastructure further. Today we offer an array of messaging tools both for internal and external communication.

The idea of messaging is not a new one. What is unique about your product?

We comply with data protection laws, have a focus on security and integrate messaging in the media owned by the businesses we work with. Furthermore, we facilitate customer relationship management and offer very intuitive user interfaces. Our users love the simplicity of our tools although there is a high complexity in the backend. Other than that, SMOOPE combines communication among employees and within the company as well as communication with the customers. This enables maximum customer centricity.

How are the connections of SMOOPE in Baden-Württemberg and in Stuttgart?

You can hear it in my accent that I have a mixed background. I always say that I am a “Schwieche”, a Swabian Greek. We are from here and we like to work and live here. We think that Stuttgart has a lot to offer in terms of quality of life. The city is a very central location in the world, and if you want, you can go somewhere else really fast. Of course, Baden-Württemberg has as a strong economy and solid industrial back bone. That is especially interesting for us as a B2B technology provider. A lot of leading corporations in a lot of different sectors – from the automobile to hidden champions in the middle class – are based in and around Stuttgart. That’s great!.

On the other hand, there are a lot of things which are less beneficial, especially considering the startup ecosystem. We are so well off here that a lot of people are asking themselves: “Why should I take risks and give up my safe job at Daimler, Porsche or Bosch?” I believe that this comfort zone can sometimes limit innovation. People won’t choose to follow their passion because they don’t want to give up their job security. I see great potential here. How can we, as the State of Baden-Württemberg which by the way always had an entrepreneurial spirit, reclaim it and motivate young people to put their ideas into practice? We certainly can explore new models in this space in collaboration with the government, the industry and the startup scene.

But with initiatives like the “STARTUP-AUTOBAHN”, especially the big corporations are encouraging start-ups.

The STARTUP-AUTOBAHN is a really great example. We were approached and asked if we want to participate in their program. What is great about this programme is that there is a matchmaking process first. You can only participate, if there is a demand for your technology in one of the participating companies. In our case we had the opportunity to introduce our company during the selection days. Two companies were interested in a collaboration with us and with one of them we actually implemented two pilot projects which are currently running. 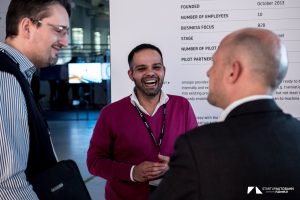 There are different levels of establishing entrepreneurship in this region. The STARTUP-AUTOBAHN with all the corporate partners behind it is a very professional and well-funded innovation program. However, the State of Baden-Württemberg has to step in much earlier. It´s about telling young people already in schools that they have more than one option.

We have to tell them: “Of course you can have a stable career in a big company with a safe income. But if you have ideas, you can also implement them because there are ways the State of Baden-Württemberg can assist you”.

I don´t think that everybody necessarily must be an entrepreneur, but a lot of great companies and ideas go down the drain because they never got a chance. Diamonds are formed under pressure, they say. This “pressure” is non-existent here. The question is how can we stimulate young people to make a well-informed decision and try something out more often? How can we encourage them to try out new things and if they aren´t working, well, it´s no big deal, right? We have to get the concept of entrepreneurship into more heads because it is the foundation for a sustainable future. Solutions to the biggest problems often come out of entrepreneurial activities.

What would be your advice for people who want to implement their ideas and want to start a startup?

The most important thing is to be honest to yourself and not to do things just because they are “hip and cool”. Everything begins and ends with truly getting to know yourself, your strengths and passions. The advice I can give everybody is not to start a start-up just for the purpose of starting a company or because you want to become rich. It can happen, but it doesn’t have to. The path to success often takes time and it’s more like a roller coaster ride. If you’re chasing money alone, it is a bad motivator. There must be a deeper meaning and purpose to it.

That is why it is so important to figure out what you are good at, what you like doing and what you would do even if you wouldn’t get paid for it. Find out what your strengths are and what makes you happy. That´s a good place to start from. Remain true to yourself, put your passions in the centre of your efforts. If you like doing something, you will do it well and if you do something well the returns will come over time.

How international are the locations Stuttgart and Baden-Württemberg in your opinion?

More could be possible, but a lot is happening already. And that is because we have a lot of internationally operating corporates here which recruit employees from allover the world. A lot of specialists, among them also in the IT field, are migrating here and the location is getting more and more multicultural because of second and third generations of immigrants who are staying here. I am a descendant of Greek guest workers myself.

“Stuttgart is a very diverse environment and offers something for everyone”

Start-ups from allover the world are coming to Stuttgart because they want to work with Daimler, Porsche, Bosch etc.. There is something for everyone here in Stuttgart, a very diverse environment. I would recommend Stuttgart to people coming from abroad because of the good standard of living, the great business and job opportunities and the fact that we are in a very central location in Europe and in the world in general.

„Messaging as a service“ – under this motto the Stuttgart-based startup SMOOPE provides safe and flexible messaging-solutions for businesses. With clients across different sectors, but a considerable focus on banks and insurance companies, the topic of data protection is a central one for SMOOPE – especially at the moment with the basic regulation on data protection (in German: Datenschutzgrundverordnung, in short DSGVO). Another aspect why SMOOPE’s technology is needed are the individualization options their product offers. Corporations might want to bring their own corporate identity and design into the system of SMOOPE. They also may want to shut off certain functions or add others or want to integrate the system in existing processes and media. SMOOPE brings that functionality into the enterprises, into their media, and configures it to be perfectly aligned with their specific use cases.

SMOOPE’s concept in short: On the one hand, there is the external communication of a business with its customers who are used to communicating through tools like Whatsapp, mainly with each other. The question here was for Mr Hatziioannou and his co-founder Halil Mandal: Why can´t people communicate in the same way also with businesses? SMOOPE offers various solutions for this, says Mr Hatziioannou: “On the other hand, businesses also have in-house communication needs. What SMOOPE accomplished with its infrastructure is that both worlds can merge together. That means that SMOOPE is, theoretically, creating the possibility that every employee within an organisation can be connected to any customer out there. The start-up’s brand promise: Own your customer engagement. We add modern conversational solutions where they create value and you can also rest assured that your data is safe and handled according to the law”.

Eleftherios Hatziioannou and his colleagues are seeing their work in a bigger picture. “How can we help people save precious life-time with our technology? We believe that wasting time with waiting in hotlines and filling out contact forms sucks. And that is what motivates us”, says Mr. Hatziioannou in the interview. “We really believe in using technology to improving lives – in our case by facilitating communication and saving time”.

The interview with Eleftherios Hatziioannou was held by our colleague Marcellina this April.