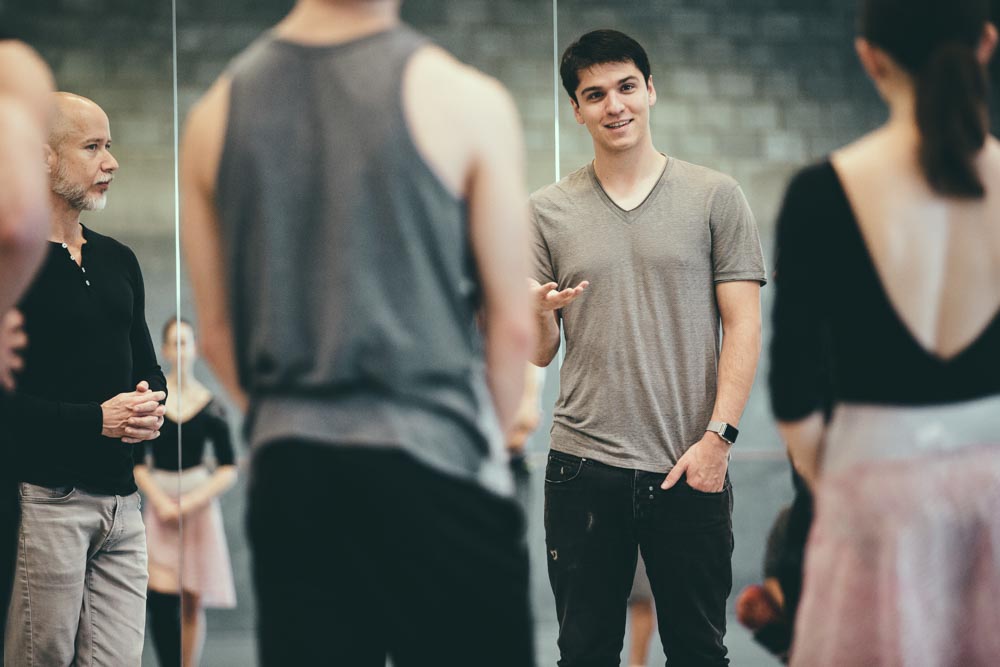 Demis: “Dance has an incredible potential to build bridges”

From Buenos Aires over Toronto to “modest” Stuttgart with its world class Opera and Ballet: Demis Volpi has worked hard to cultivate his worldwide career as a choreographer and opera director. A conversation about living in foreign cultures and how dance can ease homesickness.

Demis, you began to dance ballet at a very young age. Did your parents initiate your career?

No, quite the opposite! One morning, when I was still very young, I jumped out of bed and said “I want to become a ballet dancer” – I can’t remember why – but my parents didn’t take it too seriously. This is a nice anecdote. Βut I didn’t stop asking if I could go to a ballet class until, one day, my mother gave in. That’s how I had my first ballet class and I have been hooked ever since.

How did you come to Canada and the country’s National Ballet School in Toronto?

I moved to Toronto in the year 2000. My parents emigrated in that time from Argentina to Barcelona. I had done some research and I knew that there was no professional ballet school in Spain where I could continue my academic schooling at the same time. Having met two impressively trained dancers from Canada’s National Ballet School during a Summer School in Copenhagen, I decided to send a video to Mavis Staines, the Artistic Director of Canada’s National Ballet School. She never got back to me, so I began calling the school daily. When I finally had her on the phone, she was so impressed by my will power and necessity to dance that she invited me to join the School without ever having seen me dancing. I spent two years there.

How is it that you came to Stuttgart then?

Toronto was very far away from my family and I had always wanted to dance in Europe. John Cranko’s choreographies were the reason for me to come to Stuttgart. I also heard Reid Anderson, the current Artistic Director of the Stuttgart Ballet, speaking at a conference in Canada and I was just amazed by his approach and how he spoke about the dancers. Anderson participated at a school presidency and, after watching me dance during a performance with the ballet school, he invited me to come to Stuttgart.

How did you cope with the Swabian culture in Stuttgart? Did you have a culture shock?

Actually, yes. I had lived in Buenos Aires, a few months in Barcelona with my parents and then in Toronto – all of them are very big cities. When I came to Stuttgart, I came with my whole family by car. When we arrived at the Kernerplatz on a Sunday afternoon there was nothing going on, it seemed quite depressing. My parents looked at me and asked me if I really wanted to stay. I did.

How did you cope with living in foreign cultures as a teenager?

Foreign cultures – do you mean the dance world and the normal world or the different countries? (laughs). It’s interesting: No matter where in the world I am, if I go to a ballet studio or a theatre, I feel a little bit at home – even if I don’t know these places yet and people behave differently. Through the common language of dance you can break the ice very fast. I have always been very curious, so I enjoy traveling. But, still, going to new places makes me a little anxious because you never know how it is going to be.

“ No matter where in the world I am, if I go to a ballet studio or a theatre, I feel a little bit at home”

Do you think that culture or arts and dance can contribute to the international dialogue? Even outside of the art scene?

One example are the so called milongas, where people meet to dance tango. There, one can see people who don’t know each other nor speak the same language, but they meet in quite an intimate way. I think that dance has an incredible potential to build bridges. In comparison to other scenic arts like opera or drama, dance doesn’t have and doesn’t need the spoken language – it is a purely emotional process.

Dance is the mother language of all people. Movement is universal. You can see especially at animals or small children that they imitate movement. Also, before narrating stories through books, people shared their experiences during the hunt by the fire. This was a form of theatre and it was key in passing on knowledge and understanding each other. Who knows, maybe someday Trump and Putin or Merkel and Erdogan will dance a tango together. Wouldn’t it be worth a try?

What does integration mean for you and how do you perceive it in Baden-Württemberg?

It is difficult to express oneself in a foreign language. Maybe the integration process into the local community was easy for me as I already spoke German. I had visited a German school in Argentina.

For me, integration is a feeling. A feeling of belonging. I think that having the opportunity to influence different aspects of the community is very important. In the meantime, I have become a German citizen, but I felt at home in Stuttgart already earlier and I took part in the Swabian life long before that.

“ For me, integration is a feeling. A feeling of belonging”

As a choreographer you travel a lot to work in different countries and even on different continents. The term cosmopolite – a person who perceives the whole globe as his home – seems to fit you perfectly. What do you think about the term?

I’ve never asked myself if I was a cosmopolite but I guess that’s what it’s about, not thinking in categories, right? All the borders that one crosses when traveling, they are only symbols, they are artificial.

But yes, I actually feel at home everywhere, I admit. On holidays, however, this is more difficult than in situations where I have the language of dance to help me build bridges.

To finish our interview, one more question concerning your profession: Are you still a dancer?

No, I’m only a choreographer and opera director. What I sometimes miss is the daily training, the confrontation with myself in the context of the music. But I don’t miss dancing on the stage at all. On my premieres, I am happy to feel like an audience member.

Demis Volpi was born in Buenos Aires, Argentina. At the age of only four he started dancing ballet and later studied his passion at Canada’s National Ballet School in Toronto and at the Academy of the John-Cranko-School in Stuttgart. After his graduation in 2004, he became a member of the Stuttgart Ballet – and soon showed excellent choreographing skills. Today, he is celebrated worldwide as a talented ballet choreographer and opera director.