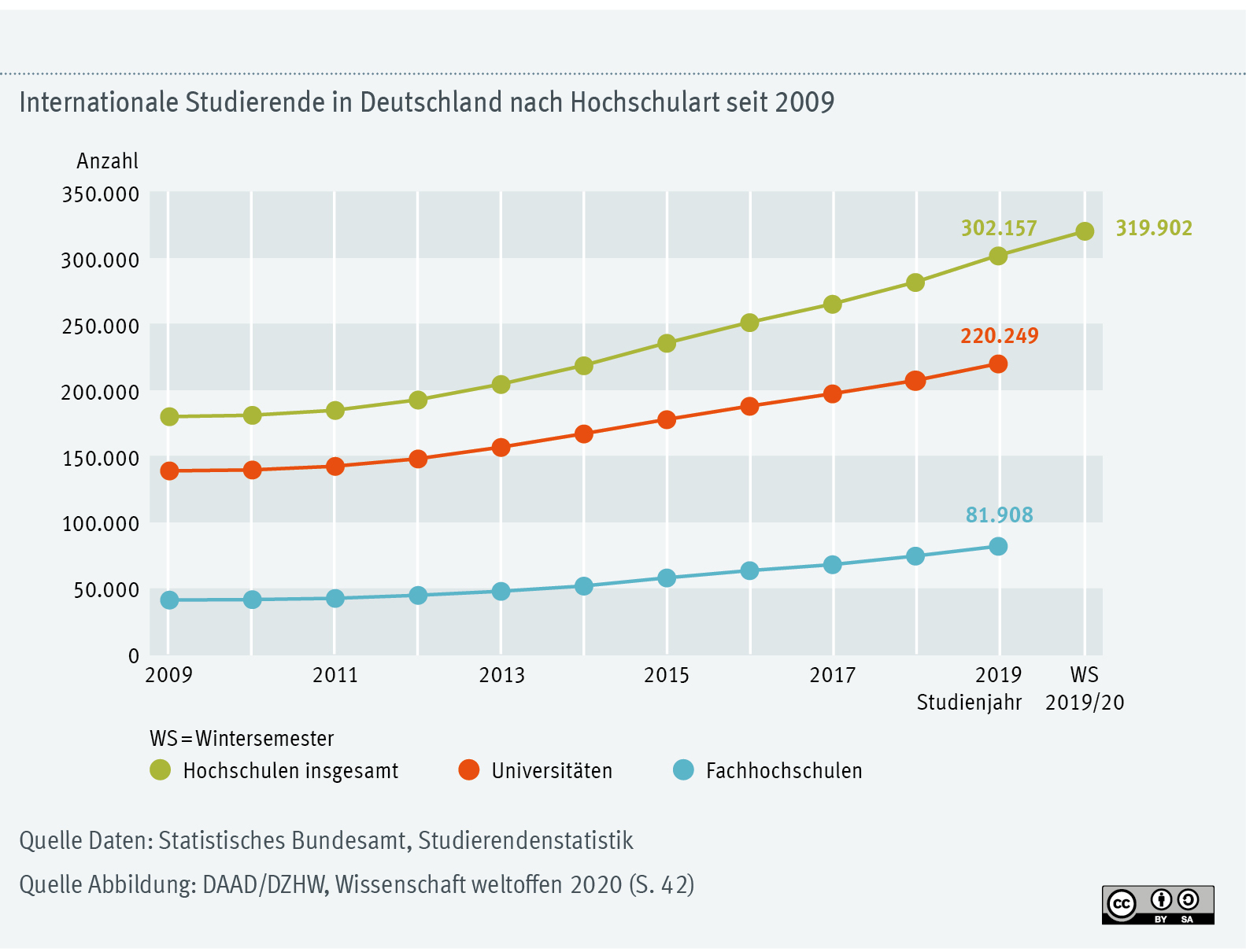 Germany still very popular as a place to study

Germany is one of the world’s most popular countries for international students: Around 320,000 were enrolled at German universities in the academic winter semester 2019/20. This puts Germany in fourth place in the global ranking, ahead of France and directly behind the traditional host countries, the USA, the United Kingdom and Australia. The interest of international students in studying in Germany is also high during the Corona Pandemic, and a recovery of the declining numbers and an increase beyond the previous figures is expected for the next few years.

Compared to the previous year, the number has risen by around 18,000 students or six per cent. This represents a continuation of the ten-year growth trend that speaks for the quality and attractiveness of Germany as a place to study. Since 2010, the number of international students has grown by a total of 76 per cent, as the German Academic Exchange Service (DAAD) and the German Centre for Higher Education and Science Research (DZHW) show in their publication “Wissenschaft Weltoffen 2020” (Science Open to the World 2020), now in its 20th edition.

“The Corona Pandemic is changing the mobility behaviour of international students worldwide. Survey data show that Germany has apparently been able to further improve its good reputation among international students thanks to the good pandemic management during the first corona wave in spring and summer. This is a good basis for convincing even more talented young people of our education system in the future and for binding them to our country. All those involved should seize this opportunity together,” said DAAD President Prof. Dr. Joybrato Mukherjee. 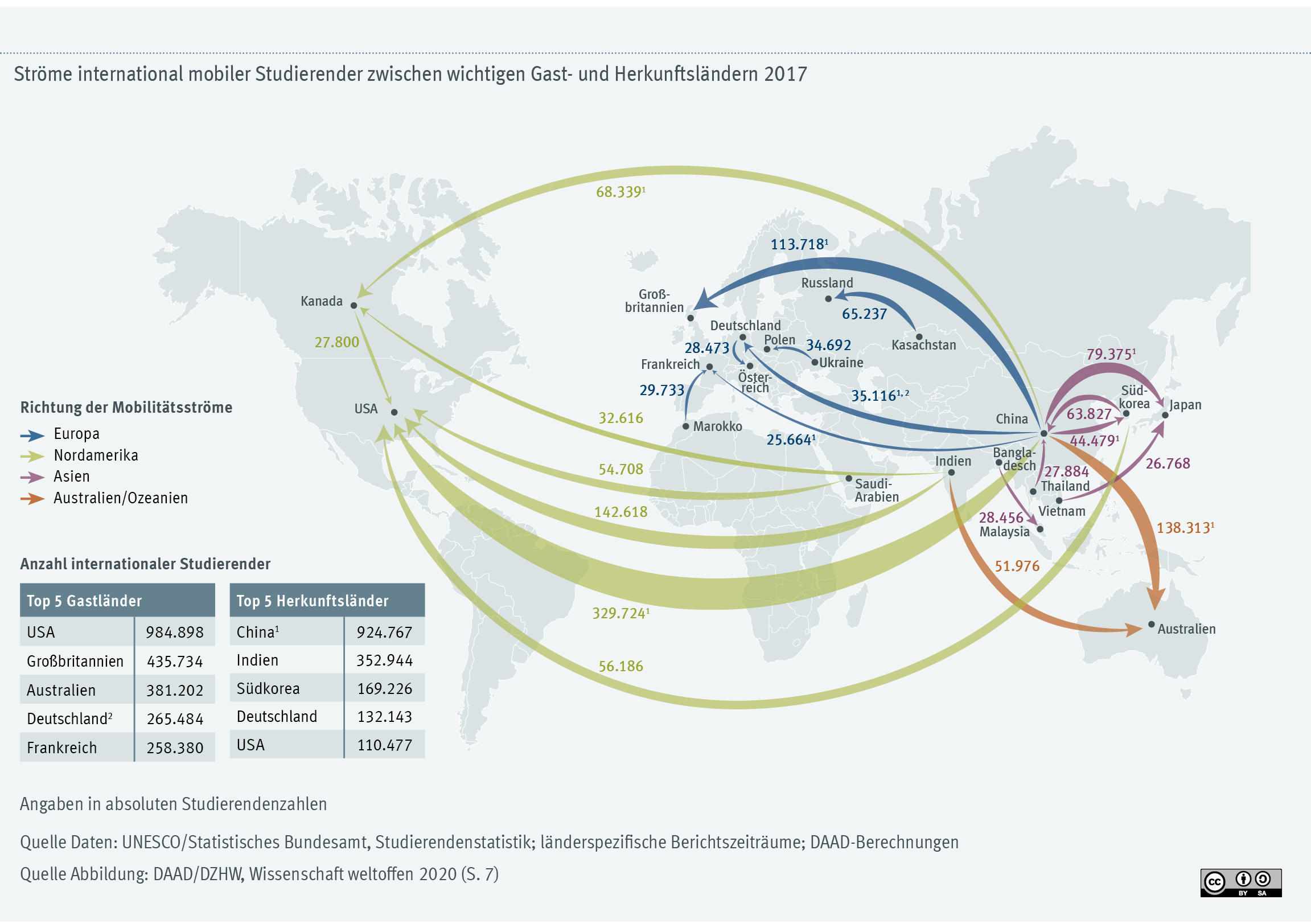 German students also continue to be internationally mobile at a high level: 140,000 of them studied abroad in the current survey. A pleasing fact: The number of students studying abroad has more than quadrupled since 1991 and more than doubled since 2000. Austria, the Netherlands and the United Kingdom are particularly popular for studying abroad. Around 66,000 German students were enrolled at universities in these three countries alone. However, due to the Brexit, a decline is expected for the United Kingdom in the future.

The number of international students has grown by a total of 76% over the last ten years to around 320,000 in the winter semester 2019/20, most of whom (73%) are enrolled at universities.

Recovery from the Corona Bend

International student mobility is also massively affected by the effects of the corona pandemic. According to a DAAD survey, around 80,000 international students had temporarily left Germany. However, many universities stuck to their exchange programmes despite the corona crisis: In a national survey conducted by the DAAD, only 22 per cent of the universities stated that they had completely suspended their exchange programmes in the 2020 summer semester. In addition, interest in studying in Germany is also high during corona periods: Applications by international students to the uni-assist association for the winter semester 2020/21 were around 80 per cent of the previous year’s figure. Looking ahead to 2021, many studies paint an optimistic picture: A majority assumes that international student mobility will recover significantly in the coming years – even if the restrictions imposed by the pandemic continue for a longer period of time. “However, innovative teaching formats and ideas, on which many universities are already working, are more than ever an important prerequisite for a positive development of international mobility. They can be a further factor in Germany’s attractiveness as a place to study,” stated the DZHW’s Scientific Director, Prof. Dr. Monika Jungbauer-Gans, in this context. 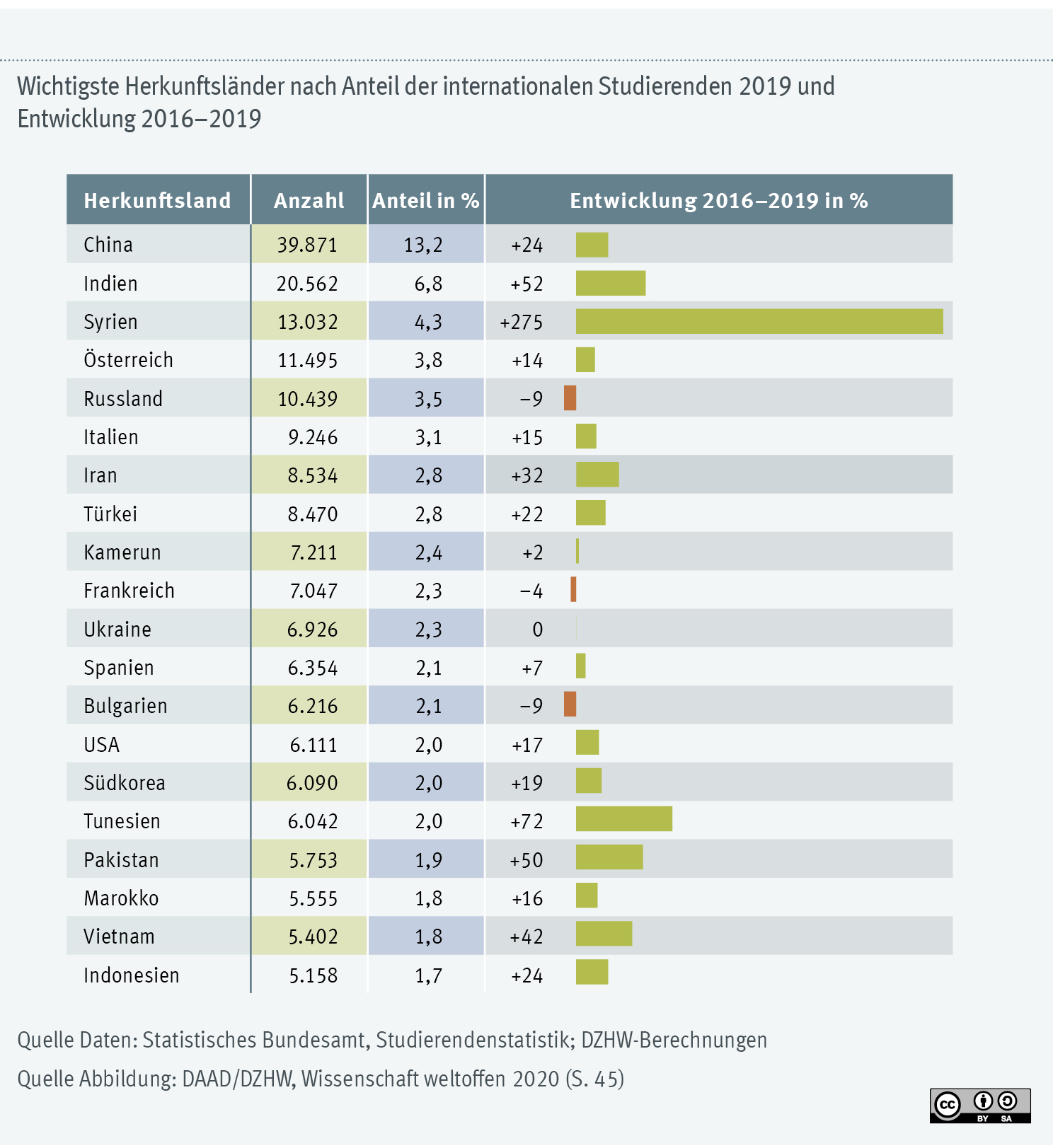 The most important countries of origin for international students in Germany are China, India and Syria, with the number of Syrian students showing the strongest growth between 2016 and 2019 with an increase of 275%.

This website uses cookies to improve your experience while you navigate through the website. Out of these, the cookies that are categorized as necessary are stored on your browser as they are essential for the working of basic functionalities of the website. We also use third-party cookies that help us analyze and understand how you use this website. These cookies will be stored in your browser only with your consent. You also have the option to opt-out of these cookies. But opting out of some of these cookies may affect your browsing experience.
Necessary Always Enabled

Any cookies that may not be particularly necessary for the website to function and is used specifically to collect user personal data via analytics, ads, other embedded contents are termed as non-necessary cookies. It is mandatory to procure user consent prior to running these cookies on your website.