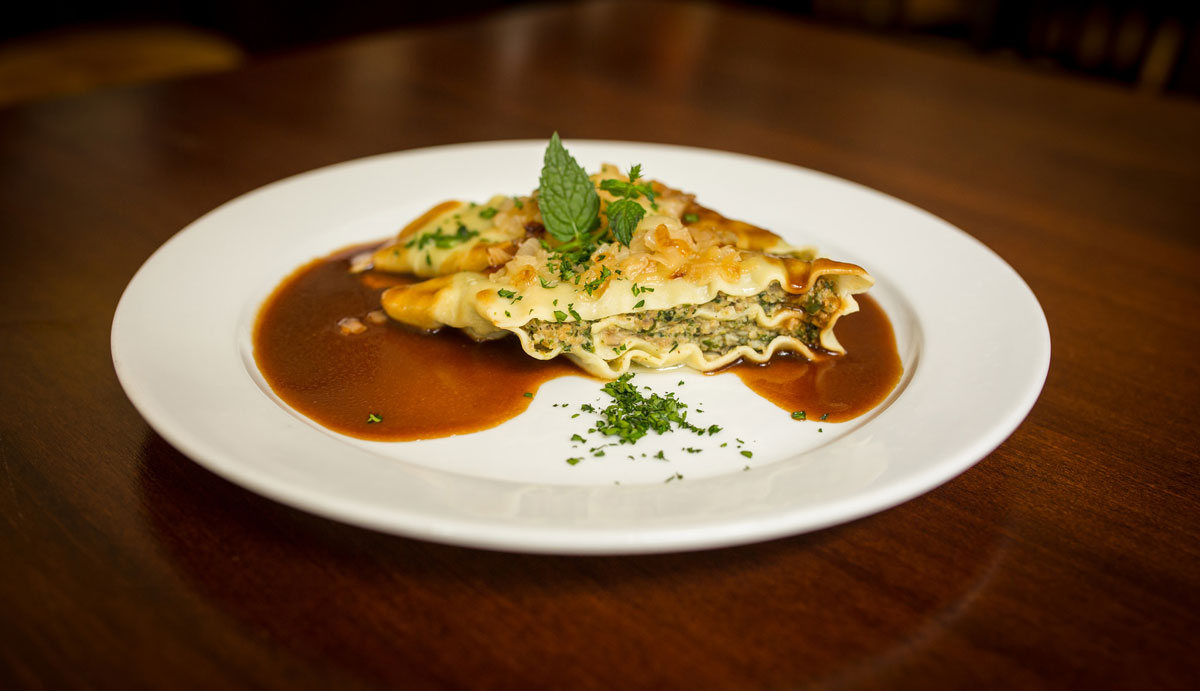 “Nothing goes to waste” goes a common saying in Swabia. Who would’ve thought that this also applies to the delicious local kitchen?

Swabia, or the “Schwabenland” as its locals call it, is a cultural, historic and linguistic region in Southwestern Germany – in Baden-Württemberg and also in small parts of Bavaria. Particularly its cuisine makes Swabia famous all over the world and you should not leave without having tried these 5 classics…

A “Tasche“ is a bag or pocket. Among Swabian natives “Maul“, the German word for muzzle, is a socially acceptable description for mouth. A Maultasche is not simply a Swabian type of flat pasta, but it is a piece of dough that has been lovingly filled with finest ingredients such as minced meat, spinach, bread crumbs and onions, flavoured with various herbs and spices.

Where and when Maultasche was conceived and for what purpose? A vile explanation states that it is merely one of the numerous Swabian examples for using up leftovers following the well-known theme “Bei uns verkommt nix!“ (“We won’t let anything go to waste!“). Another popular story relates Maultaschen to the “green“ foods that used to be traditionally prepared on Maundy Thursday, in German on “Gründonnerstag” (Green Thursday), and that got eaten on Good Friday. It appeared that later, some time during the Thirty Years War, monks managed to get hold of some meat, during precisely that Lent Period. And these were not just any odd monks but the Cistercian monks who lived in the famous monastery of Maulbronn founded in 1147. The monks were surely God-fearing, but also hungry – and Swabian rogues on top of that. What did they do? They minced the meat until it looked like a mash of some sort. Then they added this gift heaven had provided them with, complementing it with a substantial amount of greenery, and, finally, wrapping the lot as a “dough pocket“. The description “Herrgottsbscheißerle“ (“little cheeky cheaters trying to deceive the Lord”), implies the idea of the monks. Given that the Lord has insight into the soul of his servants, how would He not see inside the Maultäschle?

Spätzle – a term generally attributed to the Swabian diminutive of ‘Spatz’, i.e. little sparrow or also used as nickname for the beloved partner – are egg noodles of soft texture. They typically accompany meat dishes prepared with an abundant sauce or gravy, but they can also take on the leading role – such as in the Cheese Spätzle where they are accompanied often by a delicious alpine cheese.

Basic Spätzle dough consists of flour, eggs, salt and water. Unlike the dough of German noodles, it is not left to dry but is shaped and dropped into boiling water while still being soft. Traditionally, Spätzle are made by either scraping the thick dough off a wooden board into the water or they are formed by hand or with a spoon – resulting in various shapes ranging from ‘small sparrows’ to ‘small buttons’, a more compact variety.

Not only popular in Swabia but also in Austria, this dish might not exactly roll off your tongue, but it will melt in your mouth! The name means “roast beef with onions” and consists of a sirloin steak and a sauce with roasted onions and often red wine. In Swabia it’s served most of the times with the famous Swabian pasta “Spätzle”.

Another famous meal accompanied by Spätzle and also string sausages is “Linsen and Spätzle”. The lentils are soaked in water over night and boiled in broth with onion and bacon (and in some recipes also carrots and potatoes). Don’t forget: Put vinegar and mustard on the table if you want to satisfy your Swabian guests!

There are many regional names for the potato, like the Swabian word “Grumbiere” or crooked pear, while someone from Baden would call potatoes “Erdäpfel”, like the French “pommes de terre”. For many people in Swabia and Baden., a good potato salad is a sign of great cooking.

The secret of a good potato salad can only be learned by observation and years of practice. The basic ingredients seem quite straightforward: potatoes, an onion, vinegar, oil, salt, pepper and hot broth. But: which potatoes are best? How long do they need to cook? How cold can they be when they are peeled? In what quantities and in what order should the other ingredients be added? How do you fold the sauce gently, but also risky and evenly on the potatoes? And above all: how firm and moist should a real potato salad feel in the mouth? The locals say nothing; they just keep on making it.

When do you eat the salad? Potato salad usually makes its big entrance as a star performer, alongside the obligatory mixed salad, to accompany meat dishes during a traditional Sunday lunch. But it is also often served with sausages. For a truly traditional dish, the salad is served as the only accompaniment to a real Viennese Schnitzel made of thinly-beaten veal.